The most recent development in LASIK surgery is FemtoLASIK. This technique is also described as “All-Laser” LASIK or “Bladeless” LASIK. With LASIK the corneal flap is made in a mechanical way by means of a blade and a motorised keratome. FemtoLASIK on the other hand, uses a femtosecond laser to create the flap through photodisruption.

How does the femtosecond laser work?

The area and depth of the cornea that will be affected by the laser are set beforehand by computer software: the surgeon can define the diameter and depth of the flap precisely before the start of the surgery.
Unlike the keratome the Femtosecond laser uses a low vacuum suction ring. This means that the eye will receive less pressure. 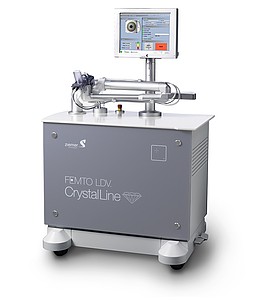 The Femtosecond laser uses the principle of photodisruption: infrared laser energy inserts a precise pattern of tiny, overlapping spaces just below the corneal surface. The laser operates at extremely high speeds: pulses of one quadrillionth of a second, or 1 femtosecond. Every femtosecond, the focused laser pulses divide material at the molecular level without the transfer of heat or impact to the surrounding tissue.

Each pulse forms a microscopic bubble. The effect of the photodisruption occurs only in the area where the corneal tissue is severed. Tissue outside of the defined area is unaffected. A complete cut in the cornea is achieved by placing thousands of these laser pulses next to each other: as the laser moves back and forth across the eye, the bubbles are connected in such a way that they form a corneal flap. The surgeon can follow the entire process through the operating microscope and on a special monitor.

After the flap has been made, the surgeon lifts up the flap with an instrument designed to do so. Now, the Excimer laser is used to reshape the cornea in order to correct the refractive error. Finally, the surgeon replaces the corneal flap.

Advantages Femto-lasik
Preparing for an operation

Video: How does Dr. Vryghem work?

Experts in this area