How do the eyes work? 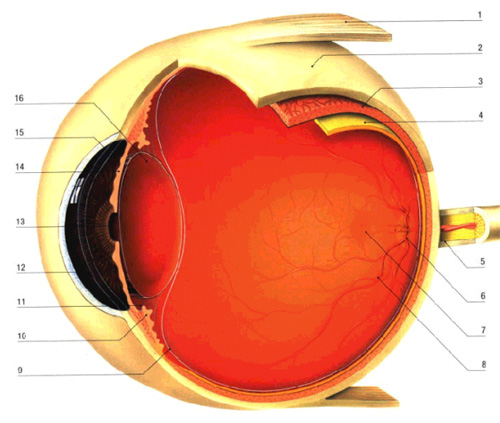 The various parts of the eye each perform a different task in converting light into images.

2.The sclera is the outer layer of the eye. It is the solid, white and opaque tissue to which the muscles adhere. It consists of connective tissue, gives solidity to the eye and protects its inner tissues. It contains the greater part of the eye and merges with the transparent cornea at the front of the eye.

4.The retina is a wafer-thin, light-sensitive tissue covering the inner part of the eye. It stretches from the place where the optic nerve enters the eyeball to where the choroidea merges with the iris. The retina consists of several layers. The outer or pigment layer is dark in colour due to its pigments. Under that layer is a layer of nerve cells or photoreceptors of which there are two kinds the cones – approximately six million in number – need light to function properly and are able to detect details and colours, the rods need little light and perceive vague shapes in the dark. The retina receives light, the cones and rods transform it into nerve stimuli that are conveyed along the optic nerve to the brain. This is where the images are finally interpreted.

6.The blind spot is about one and a half millimetres in diameter and corresponds to the place where the optic nerve leaves the eyeball. Here there is no retina, so neither cones nor rods are available to produce nerve stimuli and thus light that falls on that spot is not perceived: this is why we   call it the blind spot.

7.The macula lies in the centre of the retina, close to the papilla. It is very small but contains a high concentration of cones and is accordingly the most sensitive part of the retina. By means of it we are able to perceive minute details. De gele vlek stelt ons in staat kleine details duidelijk waar toenemen. The further we move away from the macula towards the periphery of the retina the number of cones gradually decreases.
8.The blood vessels bring nutrition to the eye.

9.The vitreous body or corpus vitreum is a clear gelatinous substance, surrounded by a thin membrane, that fills the inner part of the eye and pushes the inner layers of the eye against its outer wall.

10.The corpus ciliare is a thickening   where the choroidea merges into the iris. It consists of a ring of muscles which hold the lens in place.

11.The posterior chamber of the eye   is where aqueous humor, a clear fluid containing nutritional substances for the cornea, the lens and the vitreous body, is produced. This space lies behind the iris at the place where the lens hangs.

12.The anterior chamber is the space between cornea and iris. Because aqueous humor is constantly produced and evacuated the pressure in the eyeball remains constant.

13.The pupil is the dark opening in the middle of the iris. Light enters the eye through the pupil. In bright light, as in sunlight, the pupil narrows to protect the retina. In lesser light, as in a dark room, the pupil widens to allow more light to enter the eye.

15.The cornea is is the transparent, clear tissue at the front of the eye. Light enters the eye through the cornea’s wide surface and is directed towards the pupil. Two thirds of the refractive power of the eye, which directs the light rays towards the retina, is due to the cornea. It contains many nerve ends and so is very sensitive. To avoid drying up, tears are spread by blinking over the surface of the cornea.

16.The crystalline lens is the clear lens which hangs behind the pupil. Together with the cornea it ensures that the light rays entering the eye are concentrated and directed so as to fall precisely on the retina. This process is called refraction. The flexibility of the lens enables it to become flatter or steeper, by means of an internal muscle, depending on the distance from the object viewed. This process is called accommodation. In this way an object, whether near or far away, can be seen as a sharp image. The image on the retina is an inverted picture of the object whose light rays are received by the eye.